News
Thank You Plaque From Akut Team To Çayeli Bakir 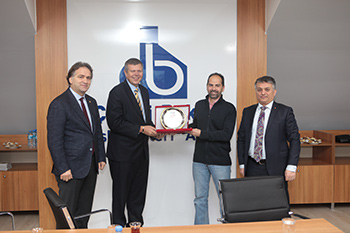 Nasuh Mahruki has paid a courtesy visit to Çayeli Bakır General Manager on behalf of AKUT team which receives training on risks in the mines and their management in Çayeli Bakır İşletmeleri in the past November. Rize Governor Ersin Yazıcı, AK Party Istanbul congressman Dr. Ismail Safi and Çayeli District Governor Turgay Ünsal have also attended to the visit.

Nasuh Mahruki and AKUT district team of 15 people have paid a visit to Çayeli Bakır management for trainings made in Çayeli Bakır. Remarking that training on search and rescue in mines and confined spaces which is get in Çayeli Bakır İşletmeleri area is so beneficial, Nasuh Mahruki, states that being the first search and rescue team in Turkey, AKUT has fulfilled its lack of experience on underground by means of this training and they can operate as support team in underground rescue. Mahruki, thanked General Manager Iain Anderson with a plaque for this opportunity.

Stressing his gratitude with the words of “It was so important for us to receive such training in the safest mine of Turkey”, Mahruki, has shared his request with company officials regarding continuation of similar trainings and collaborations. Rize Governor Mr. Yazıcı states that Çayeli Bakır İşletmeleri can be shown as a reference by emphasizing 11 refuge stations being in Çayeli Bakır despite not a legal obligation.