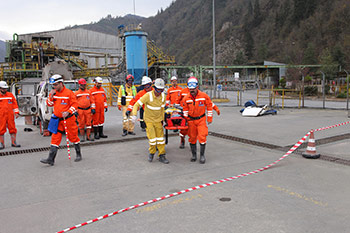 Çayeli Bakır held an emergency drill to test its capacity to handle emergencies that may occur in the mining site. The Rize 112 Emergency, the National Medical Rescue Team (UMKE), the Disaster and Emergency Management Directorate (AFAD), the Rize Fire Department and Çayeli Gendarmerie Command participated in the drill where scenarios under the headings of first aid, rescue and fire fighting were practiced. 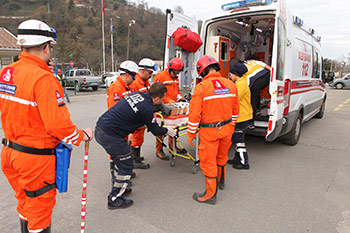 Çayeli Bakır, an underground mining operation of Turkey, held an emergency drill for mine employees. The company, which has been operating since its foundation with the mission that “Our real gems are our employees” and always keeping occupational health and safety as its priority, instructed employees about safety precautions during an emergency with an organized emergency drill. The drill, which was organized to test capacity to handle emergencies that could occur in the mining site, was held a total of six times throughout the year.

A variety of scenarios including first aid, rescue and fire fighting scenarios were created for the emergency drill. In the scope of the scenario, in which there is an accident involving some of the mining community being trapped inside a light commercial vehicle, the correct first aid techniques were practiced to rescue the injured and present them to the health authorities. Also a scenario, in which another light commercial vehicle was on fire and properly extinguished, was carried out. As a requirement of the scenario other organizations such as Rize 112 Emergency, the National Medical Rescue Team (UMKE), the Disaster and Emergency Management Directorate (AFAD), the Rize Fire Department and the Çayeli Gendarmerie Command participated as organizations the employees could get assistance from when their efforts were not sufficient to overcome the situation.

Çayeli Bakır General Manager Murat Güreşçi thanked everyone after the drill and said “Since 1996 we have been conducting these drills without prior notice at least 4 times and sometimes six times a year with our Emergency Control Team of 10 people, our Emergency Rescue Team of 20 people and employees working on our shifts to carry out a coordinated effort involving 60-70 people. Today we have completed another successful and coordinated drill with 3 scenarios. I want to thank everyone who participated in the drill and the 112 Emergency, UMKE, AFAD, City of Rize and Çayeli District Gendarmerie team members who provided their support”.