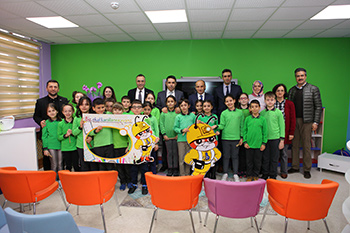 Çayeli Bakır, an underground mining company of Turkey, aims to improve safety awareness in kids with a new social responsibility project called “Bilge Karınca” (the Wise Ant). The first presentation of the project prepared in cooperation with the District National Education Directorate took place at the 9 Mart Elementary School.

Çayeli Bakır has added a new element to its social responsibility educational events. A mining company that has distinguished itself with rules on occupational health and safety, Çayeli Bakır aims to improve safety awareness among kids with an animation film explaining the rules that need to be followed in school through a new social responsibility project called “Bilge Karınca” (The Wise Ant). With the objective of increasing awareness for school rules among the students attending school in the district, Çayeli Bakır has presented the first course in the scope of the Bilge Karınca project to students at the 9 Mart Elementary School with the participation of Çayeli Governor Mehmet Öztürk, Çayeli District National Education Directorate Director Hüseyin Şahin and Çayeli Bakır İşletmeleri General Manager Murat Güreşçi. 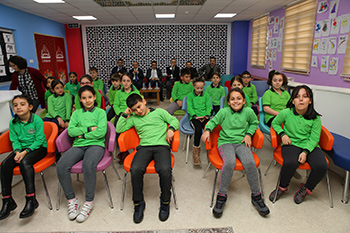 Çayeli Governor Mehmet Öztürk expressed his gratitude to the Çayeli Bakır İşletmeleri General Manager Murat Güreşçi for the project they had undertaken by saying “There are rules to be followed in school just like everywhere else. With this film our children, who are already aware of the rules, will be even more careful”.

General Manager Murat Güreşçi of Çayeli Bakır İşletmeleri, the occupational health and safety rule culture of which have been embraced by local community since the day it was established, said that they aimed to make the children more aware of the rules in school, where they spend most of their time, through the Bilge Karınca project and added “The Çayeli community is aware of our sensitivity concerning occupational health and safety. They strive to apply our occupational safety rules to their own work. Now we have prepared a course for our precious children in line with this approach as we feel that it is necessary to make sure children embrace awareness for safety at an early age”.