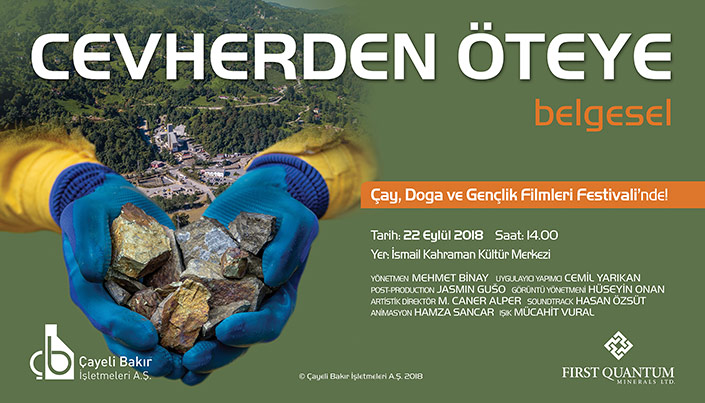 The story of ÇayeliBakır, Turkey’s underground mining enterprises, is being told in a fascinating documentary. “Beyond The Ore” not only shows the natural beauty of the Black Sea region, but also reveals the working environment that has been synonymous with safety in Rize for years. The documentary will premiere at the Rize Tea Film Festival, which takes place in Rize on 20-23 September 2018.

The story of ÇayeliBakır, one of the pillars of Turkish metal mining industry contributing to local and national economy since 1992, is the subject of an award-winning director Mehmet Binay’s 48-minute documentary.

“Beyond The Ore” documentary, which came to life after 300 hours of underground, outdoors and aerial filming in 2017 and 2018,presents the natural beauties of the Black Sea region to the audience while revealing the disciplined working environment due to the technological and metal risks of metal mining.

The film tells the story of how the people of Eastern Black Sea region, who are mainly engaged in tea farming become acquainted with safe mining after the establishment of Çayeli Bakır. The film also shows contributions of the enterprise to the region through social development projects and the positive effects of employment.

The documentary will premiere at Rize Tea Film Festival on Saturday, September 22 at 14:00 at Rizeİsmail Kahraman Cultural Center.