News
Change of Flag Bearer in the Management of Çayeli Bakır 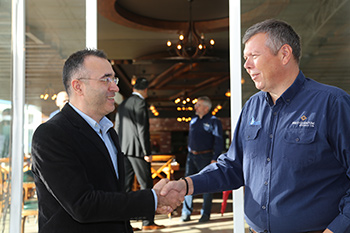 Iain Anderson, who came together with local journalists to say goodbye as a result of the change of duties at a senior level, which has taken place at Çayeli Bakır İşletmeleri (ÇBİ), announced that Murat Güreşçi has been appointed as the acting General Manager of ÇBİ. Anderson, who stated that he was proud to have left his role of General Manager, which he had been conducting for many years, to a leader who had developed within ÇBİ, said that he had been appointed as the Managing Director of the company Cobre Las Cruses of First Quantum Minerals(FQM), in Spain.

There has been a change of the flag bearer at Çayeli Bakır İşletmeleri (ÇBİ), which is operated by the global mining and metals company First Quantum Minerals (FQM). Iain Anderson, who announced the change of duties by coming together with local journalists, said that Murat Güreşçi, who was the Mining Manager of ÇBİ, had been appointed as the acting General Manager. 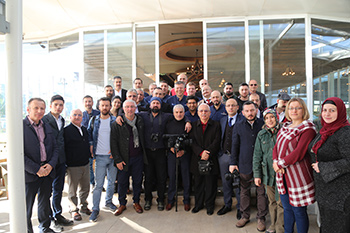 In his farewell speech, Iain Anderson stated that the years he had spent in Rize had added a lot to him, and said, “During my time here, I felt myself to be at home, thanks to your hospitality. I have experienced unforgettable times here, together with my family. I brought up my child here, and established very good friendships. The place I have lived longest in the world is Rize. Therefore, it is difficult for me to leave. I hope to come back to Rize frequently, and visit my work colleagues and yourselves.” Anderson, who underlined that a Turkish leader had been appointed as the General Manager of ÇBİ for the first time, said, “I am extremely proud to have left this role, which I have conducted fondly for many years, to a leader who has developed within ÇBİ. With Murat Güreşçi, ÇBİ has a Turkish General Manager for the first time. While sharing this great honour, I do believe sincerely that ÇBİ will continue to be an exemplary mining operation in the future, as it has been until now.”

Anderson, who is preparing to take over at the company Cobre Las Cruses, which is also operated by FQM, in Spain, together with this change of duties, said, “Cobre Las Cruses is a considerably bigger operation than Çayeli Bakır in terms of mining. An exciting and difficult process will have begun for me in Spain.”

On the other hand, Murat Güreşçi, who has been in various roles within ÇBİ since 2003, said, “I would like to state that I feel proud of my new role at ÇBİ, where I have been working for many years. I am extremely excited to be acting as a leader in all of the achievements of our family from now on. ÇBİ is an institutional operation, which has strong and settled values. We will continue our activities by varying these values even further forward, together with all of my work colleagues,” in the conference.

About Murat Güreşçi
Murat Güreşçi, who began his career in 2001, joined ÇBİ in 2003 as a Rock Mechanics Engineer. He followed this up with the roles of Underground Shift Engineer, Senior Mine Planning Engineer, Chief Engineer of Mine Productions, Director of Mine Technical Services, Processing Manager and Mining Manager.

About Iain Anderson
Iain Anderson will continue his career under the umbrella of First Quantum Minerals, at the Cobre Las Cruses (CLC) mine, which has a higher production capacity when compared to ÇBİ. Anderson, who began working in Turkey in 2001, worked as General Manager at various mining operations in Africa and Central Asia until 2009. Anderson, who then returned to Turkey and began to work at ÇBİ in 2009, played an active role in ÇBİ becoming an exemplary mining operation, working with an awareness of the subjects of safety, sensitivity to the environment and social responsibility, throughout his time at the company.