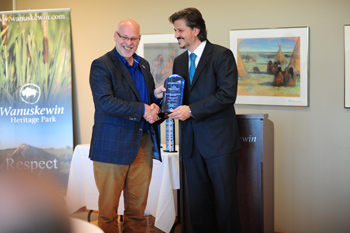 For the first time this year, the performances of mining companies in different countries were evaluated for the Leadership for Sustainable Mining Awards presented by the Mining Association of Canada - MAC every year. Çayeli Bakır İşletmeleri, a company that operates in our country, was deemed to be deserving of this award that is being given to a recipient outside of Canada for the first time this year.

Canada’s national mining organization, The Mining Association of Canada – MAC, announced the winners of the Leadership for Sustainability in Mining Awards given to companies that operate in the mining of precious metals, uranium, diamonds, coal, oil sand and industrial minerals every year. For the first time this year companies with outstanding performance in other countries were also given awards.

The performance of Çayeli Bakır İşletmeleri, which was evaluated according to 23 criteria on the subjects of Work Health and Safety, relations with local communities and social assistance, crisis management, mining wastes management, preservation of biodiversity management, efficient energy use and greenhouse gases emissions under the “Towards Sustainable Mining” standards, which are required by the government for mining companies operating within the borders of Canada and voluntary for the others, was deemed deserving of this award. The award, which was presented by Mining Association of Canada President and CEO Pierre Gratton, was accepted on behalf of Çayeli Bakır İşletmeleri by WHS and Environment Manager Mehmet Eğriboyunoğlu.